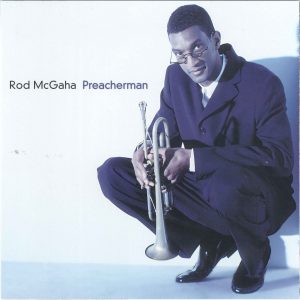 The true mark of an artist is his willingness to delve into areas both new and old. In a short time, Rod McGaha has gained respect for doing just that. As a trumpeter, composer, vocalist, lyricist and producer, McGaha is unique in his ability to combine a wide variety of influences into aneclectic, globally conscious blend which rings totally fresh. McGaha is an artist able to bring many gifts to his music. While he is admired for his unique talents as a powerhouse instrumentalist, singer and tunewriter, it is McGaha’s presence as a performing artist that has garnered him respect from some of the best players in the industry, including the legendary drummer Max Roach. A past winner of the Louis Armstrong Jazz Award for Outstanding Jazz Trumpeter and the Oak Lawn Jazz Festival All Star Award, McGaha has joined the ranks of some of the most promising up and coming jazz players today.

Preacherman was produced by Delfeayo Marsalis of the legendary Marsalis family and Rod McGaha and guests on the album include ChrisBrown on drums, Roger Spencer on bass and Lori Meechamon piano. Preacherman, McGaha’s first Compass release, is vastly different from the urban jazz-alternative hip hop of The Servant, which McGaha released in 1997 on the now defunct Magnatone label. Preacherman showcases McGaha’s abilities as a confident player and composer of traditionaljazz, relishing in the sounds of the jazz quartet. Though the music is notgospel per se, McGaha’s spiritual groundings shine through on the threetunes he wrote for the album. McGaha says, “Many of my greatest moments of inspiration come from sitting in church and reflecting on the messages being discussed.” With a background in the Pentacostal church, McGaha says, “I was struck by the sound and emotion that would emulate fromthe female worshippers at the altar. On the title track I concentrated on those memories and tried to create musically the sounds that I’d heard.”Other tunes on the album include a creatively arranged version of the Beatleshit Can’t Buy Me Love and the classic favorite In a Sentimental Mood.

Amazingly, for a composer whose tunes show such a wide diversity, McGaha says he never consciously aims to create one specific vibe or another. “I grew up listening to the Jackson Five, Sly Stone and disco, and have donecountry gigs, so it’s inevitable that all of these are a part of me andaffect the way I write. But rather than force yourself to write a rock tune, a jazz piece or hip hop groove, I start with the statement I want the songto make and let the music evolve from there. Aiming for a specific soundhas never worked for me. It’s better to see where the initial spark takes you.”

Raised in Chicago, McGaha’s father was a huge jazz buff who turned him on to Miles and Louis Armstrong at an early age, McGaha was more apt inhis formative years to be checking out Parliament Funkadelic, James Brown and Kool & The Gang. He began playing both guitar and trumpet around fourth grade, but eventually focused on the horn due to a high school teacher’s great influence.

After playing in numerous school bands and clubs around town, McGahabegan his professional career right out of high school touring with theDuke of Earl himself, Gene Chandler. Later, while attending NortheasternUniversity in Chicago and then DePaul University on scholarship, his eyeswere opened to traditional jazz for the first time. Famed trumpeter ClarkTerry (who played with Duke Ellington and Count Basie) discovered McGaha at a local festival and took the young performer under his wing of which lead to numerous jazz cruises.

While McGaha’s extensive resume as a sideman includes gigs and tourswith top pop and soul names like Kenny Rogers, Bebe and Cece Winans, The O’Jays, Take 6 and Lou Rawls, he is also a highly decoratedjazz performer. Among his other trophies are the Maynard Ferguson Awardfrom the Notre Dame Collegiate Jazz Festival and the Outstanding Trumpet Soloist Award from the National Association of Jazz Educators.He has appeared on BET and his song Wish I Knew was recordedby Shelby Lynne and is featured in the movie Two If By Sea.

McGaha has had the opportunity to play his music throughout the world,with stops in Egypt, Nigeria, Europe and Japan. “There is no doubtthat seeing and hearing the people and music of all these cultures playsa part in what I create,” he says. “I don’t consciously createsongs based on one specific image or another, but the exposure has helped increase my global awareness.”