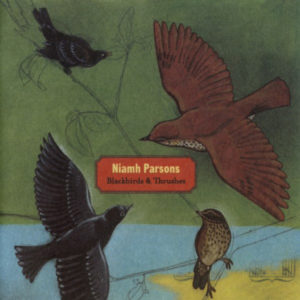 Niamh Parsons has come to be known as one of Ireland’s most distinctive singers. Her earthy, sensuous voice has drawn comparisons to such venerated singers as Dolores Keane, June Tabor and Sandy Denny. The great Scottish balladeer Archie Fisher said of her, “a songstress like her comes along once or twice in a generation.”

Never has this been more clear than on Niamh’s (pronounced “Neeve”) latest album, Heart’s Desire (Green Linnet, 2002), produced by Dennis Cahill. As with her two previous releases, she furthers the tradition of Irish song with heartfelt delivery and unadorned settings. The collection of songs is drawn from both traditional sources and modern writers, including Mark Knopfler and Andy Irvine. Heart’s Desire has received glowing reviews, and named “Celtic Album of the Year” by the Association for Independent Music (AFIM).

Born and raised in Dublin, Niamh and her sister learned to love traditional Irish singing and harmonizing from their father, Jack Parsons, to whom Niamh dedicates Heart’s Desire. “Daddy had a beautiful voice,” she says, “and a great ear for a good song.” Her mother was also a singer and a set dancer from Co. Clare. The family would often join in song at the local Dublin singers’ club, to which Niamh still attends.

Niamh’s passion for singing blossomed naturally into a penchant for collecting songs. She is always on the lookout for songs, new and old, that speak to her-listening to new albums, scouring the Traditional Music Archives in Dublin, sharing notes with a network of friends and other singers. Once she discovers a song she likes, Niamh views herself as the vehicle for the music. “For me the song is more important than listening to my voice,” she says. “I consider myself more a songstress than a singer – a carrier of tradition.”

Throughout her career, Niamh has performed with a wide variety of artists, and has appeared at nearly every prestigious folk festival on either side of the Atlantic. As a member of the traditional Irish band Arcady (led by De Dannan’s Johnny “Ringo” McDonagh), she is featured on the group’s AFIM-awarded CD Many Happy Returns. She appeared before President Clinton and Irish Prime Minister Bertie Ahern in Washington, joined Grammy Award winner Paul Winter for an album and a summer concert in New York, and performed on A Prairie Home Companion when the show broadcast live from Dublin.

The Loose Connections’ second album, Loosen Up (Green Linnet, 1997) was another buoyant mix of originals and well-chosen contemporary ballads, like the gorgeous “Cloinhinne Winds” and Tom Waits’ “The Briar and the Rose,” a powerful a cappella duet with Fran McPhail of the Voice Squad. Once again the album featured first-class musicians, including guitarist Gavin Ralston (Mike Scott, Sharon Shannon) and Kilkenny accordion player Mick McAuley (now with Solas).

In 1999, Niamh took a bold step and returned to her roots with her first solo album, Blackbirds and Thrushes (Green Linnet) a collection of traditional Irish ballads gathered from over 15 years of Niamh’s singing repertoire. In her words, “these songs are living in me.” The album won instant acclaim as a welcome return to traditionalism. The Boston Globe declared that it “expressed the sorrow and longing of the Celtic soul more deeply than any within recent memory”, and Irish Music Magazine called it “simply magnificent traditional singing.”

Keeping in form, Niamh’s next CD In My Prime (Green Linnet 2000) was another collection of mostly traditional material, and again received widespread praise. Folk Roots named it one of the top albums of the year and The Irish Voice called the album “a must-have disc for lovers of Irish song.” It also saw the emergence of Niamh’s new accompanist, talented young guitarist Graham Dunne. The album was nominated for Album of the Year by BBC Radio 2 (UK) and the Association for Independent Music (US).

With Heart’s Desire the newest addition, it is a body of work that has proven Niamh Parsons one of the premier vocalists of her time and a keeper of the flame in Irish traditional song.

Quotes From the Press

“Niamh Parsons sings like an angel.” – Chicago Tribune
“It’s quite, quite wonderful, throw back the head stuff, utterly devoid of pretense or preciousness.” – Hot Press (Ireland)

“Subtle and expressive in delivery… one of those singers who sounds totally wrapped up in the meaning and message of everything she performs.” – The Scotsman

“One of the freshest and brightest on the Irish music scene today. Her strong expressively husky voice combines some of the best qualities of such stalwart vocalists as Dolores Keane and June Tabor. She has Keane’s gift for emotive sweep and Tabor’s talent for deep-rooted interpretation.” – Irish Echo

“Irish singer Niamh Parsons proves by this CD that she’s still very much indeed in her prime….She’s done it again here with, with more lovely songs from Ireland and beyond. But it’s not just the beauty of the songs that makes this CD, it’s what Parsons does with each song. She breathes sweet life – and sometimes bittersweet sorrow – into each word as she lifts the lyrics off the page and sets them flying.” – Pulse!

“Parsons has a beautiful voice, with a wide range which maintains purity from crystalline soprano down to throaty alto. What makes In My Prime a great recording (other than her considerable ability) is her comfort with the material and awareness of where her strengths lie.” – Irish Herald

“For anyone who hasn’t been paying attention over the last few years, Niamh Parsons has a drop-dead gorgeous voice and is a stunning singer of anything from traditional ballads to contemporary rock….What makes Niamh so outstanding is her ability to just let herself be the vehicle for a good song, rather than taking it by the neck and ’making it hers’. By going back to these songs in her prime, she breathes new life and freshness into them.” – Folk Roots

“Niamh Parsons has quietly become one of Ireland’s leading traditional singers. Her voice has an expressive subtlety and warmth that few other singers have…Perhaps the best parts are the two unaccompanied songs that truly show the power and timelessness of her voice. A recording that will sound as fresh 10 years from now as it does today.” – Dirty Linen

“This album from emerging star Niamh Parsons Blackbirds & Thrushes expresses the sorrow and longing of the Celtic soul more deeply than any within recent memory. Parsons relies on simple accompaniment and a lovely heartache of a voice…Spare settings allow every nuance of her splendid voice to shine through.” – The Boston Globe

“A marvel of musical purity and unadorned charm, its 12 songs exude a pristine beauty that grows more fetching with each new listening. The Dublin-based Parsons is a splendid singer, and her purity of tone, shimmering clarity and heartfelt delivery perfectly serve the timeless airs and laments featured here.” – San Diego Union-Tribune

“Niamh Parsons may be well known for her work with Arcady and with her own band, the Loose Connections, but she is also an outstanding solo artiste. She has put together an impressive collection of songs, all painstakingly researched and immaculately presented, a true labor of love.” – The Living Tradition